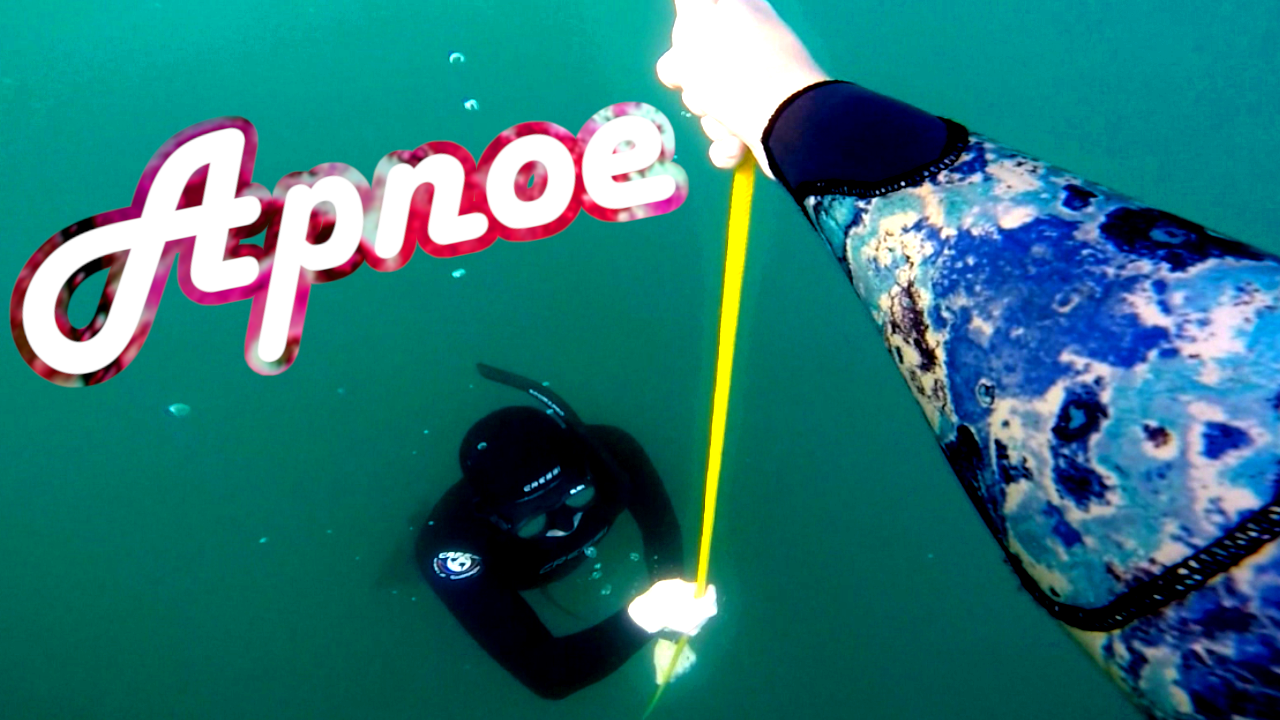 Whoever harpooners will sooner or later come across Apnea diving . So it is with many and so it was with me. Freediving is the ideal training option if you don’t want to fall out of training in winter. It started with me walking into a public bath with my brand new fins under my arm, because I wanted to try them out without waiting long for the next vacation. The disappointment was not long in coming. A lifeguard appeared and directed me to my place.

Now an alternative had to be found and like every normal person my age the answer was: Google. A apnea diving club was quickly found and I showed up there for the first trial training. There I found some very experienced like-minded people who gave me lots of good tips for getting started. At first I trained with a view to being able to dive deeper and, above all, longer while harpooning. A few weeks of training are quickly noticeable and it is much easier to reach greater depths and endure longer without the diving reflex set in.

Anyone who wants to learn to dive apnea basically has two options. First, you go to a club like me and do a trial training there, if you like the whole thing, you register there. Possibility two is to do an apnea course , which you will probably do in a club after a certain amount of time. Here I recommend everyone to complete the so-called Brevet . The Brevet is a certification recognized throughout Europe that you understand what you are doing while diving, comparable to a diving license. The courses are offered in many cities across Germany and cost around € 100.

To do this, you will learn the most important theory, physiology and hydrology behind apnea diving. In the practical part you will learn things like the right training options, turning, rescuing accident victims and many, many other important aspects. Many diving clubs require the certification as a basic requirement for participation in training and after some experience I can say that it is worthwhile. In the photo you can see me Happy after passing my certification exam.

Static refers to apnea diving with the attempt to achieve a maximum diving time. In order to get good times (4 minutes upwards), the apnea diver breathes deeply and slowly for a few minutes before the final attempt. The aim of this is that the diver has the lowest possible heart rate, which results in a lower oxygen consumption of the body. When diving statically, it is important to move as little as possible underwater, every additional movement costs oxygen and thus again seconds of the maximum diving time.

Dynamic describes two different forms of apnea diving. Distance diving and deep diving. Distance diving is often trained in the pool, while deep diving is usually only possible in the sea or in a lake. A good suit is a must for this, as the water is often very cold as the depth increases. You should approach the diving at great depths (10m plus) slowly. In addition, you should never, never, never go diving alone, safety comes first, in the pool you can surface if you have problems, but not at a depth of 15 meters. In the following video I filmed my maximum attempt so far from a depth of 19m. The video below shows a few impressions from our apnea training in Mannheim (Dynamic-Static-Dynamic)

Here I would like to report on a blackout report , which I witnessed myself during apnea training. I made the names unrecognizable for the sake of those affected. Such a blackout underwater is not fun, a respiratory arrest can quickly lead to irreversible damage to the brain.

“After training, I talked to N.’s friend J .. He spent a lot of time chatting with him, J. was lying motionless in the water. I went up to him and immediately noticed the blue coloration of his head and arms touched N., but he had no muscle tone. I immediately tried to pull N. out of the water with a grip around his chest. Everyone rushed over to lift him out of the water.

This was difficult because N. due to the weight and The transfer of Nils from the 1 meter deep water to the edge of the pool took about 30 seconds. N. Arms and his face were discolored deep blue. I felt his pulse, it was strong and regular. His eyes were closed and he wasn’t breathing.

We laid him on his back as quickly as possible and K. began to breathe him through his nose. We stretched his jaw and head and N. was called loudly by his name. O. fanned him with a towel approx 4 For 0 long, long seconds, Nils slowly began to breathe again and blinked his eyes. Over time, breathing slowly stabilized and a rosy complexion returned. His extremities twitched slightly. He opened his eyes wide. His sclera showed slight capillary hemorrhages. He also spat some blood. After about 3 more minutes he was able to talk and sit up. He didn’t remember what happened. The previously called ambulance came and monitored his heart with an EKG and his saturation with a pulse oximeter, his lungs were monitored. He came to the hospital overnight for observation. N. could be discharged the next day without any long-term damage. “

In summary, we behaved exactly right in this situation. Ventilation is the most important thing in this situation. Furthermore, diving goggles must be removed as soon as possible. Receptors on the face register the fresh air and stimulate the respiratory center. If his heart had stopped beating, cardiopulmonary resuscitation would have been necessary (chest compressions).

I am listing the disciplines that are relevant for a spearfisher, just so that you have an idea of ​​what is possible.

The currently deepest apnea dive with constant weight and fins was set up by Alexei Moltschanow on July 18, 2018. he dived 130 meters deep in Deans Blue Hole on Long Island (Bahamas).

To get an idea of ​​this achievement, hold your breath on the street and see how many meters you can walk.

In the static area (without movement) the current record is a whopping 11:35 minutes, set by Stéphane Mifsud on June 8, 2009 in Hyères, France. However, this performance was only possible through oxygen saturation before the attempt at diving.

Anyone who can only endure 3 minutes underwater with the Aspetto Spearfishing technique gets my fullest respect and then they are only 8 minutes below the world record.

The nice thing about apnea diving is that you don’t need a lot of equipment, at the beginning you only need swimming trunks, a snorkel + diving mask and a few apnea fins , the fins being the most important piece of equipment.

Fins, a difficult topic, the market is insanely full of countless models, different materials such as thermoplastic, carbon and fiberglass. Since I am assuming that the beginners of our sport appear on this blog, I would like to give you my recommendation, with which I have been diving for many years and am very satisfied, more on that later. Apnea fins are longer than normal snorkel fins . Due to the high length of up to 90 cm, the fins have a great propulsion. Simply put, you can go further and deeper with less effort. This only applies if the fins are IN the water, i.e. UNDER the water. On the surface it is more difficult to paddle with apnea fins than with snorkel fins, which makes long distances difficult. When I was out with my new fins, I often had cramps at the beginning, but they disappear over time.

My absolute recommendation for apnea beginners and advanced users are the Gara modular fins. The fins have the advantage that they are not expensive, they can be dismantled and they fit in every suitcase and they are incredibly durable. I’ve been diving with my Garas for almost 6 years now and I’m still happy with my choice. It is best to buy the fins in your shoe size +1, as you often still wear neoprene socks when diving. If you forget to do this and dive into cold water for the first time, you will remember this advice.

The Garas are available here, in the simplest version for 58 €:

I have written a long article on the subject of suit selection for freediving / freediving and spearfishing, just click on it and you will be forwarded directly to the neoprene selection:

To make the decision in the area of diving goggles and snorkels easier for you, I have already written a detailed article on the subject:

If you don’t want to spend a long time looking for a single pair of glasses or a snorkel, I recommend the following equipment set, quick and dirty, that is simply unbeatable for the price (around 100 €)! You will surely be happy with it for a few years.

107 kg Halibut Spearfishing Norway - What is inside him?

Catch and Cook a Cannibal Octopus and save an Octopus Kid