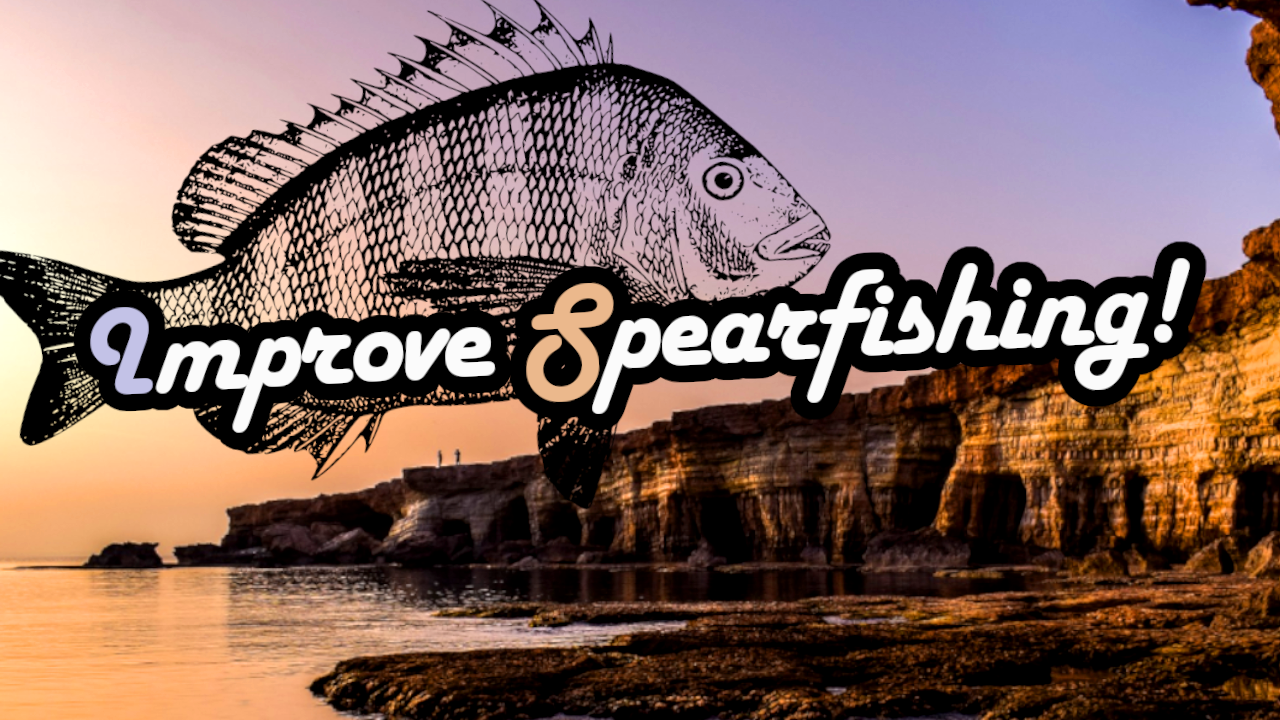 Spearfishing – Hunting with a Speargun – Learn the Basics

In this blog article you will learn how to Start Spearfishing, the basics that everyone should learn who wants to start Spearfishing with a Speargun. Some tips and tricks for your first successful hunting.

The wind is often crucial for visibility in the water. If there are onshore winds, many small floating particles are washed ashore, reducing the visibility enormously but also lure the fish towards the coast. Light offshore wind pushes these suspended particles on the open sea and is thus the ideal wind to hunt but less fish appear. Too strong wind can cause high waves, which is also rather counterproductive and sometimes even dangerous. You should not go into the water over 4 Beaufort, the wind speed can rise quickly and cause dangerous situations in the water.

While small fish such as Mullets and brasses are found throughout the whole day, the big hunters come out of their hiding places in the early morning hours and just before sunset. Since spearfishing at night is forbidden in most countries of the world, night hunting is not mentioned in detail either. The night hunting ban is justified by the fact that fish fall into a resting state at night. This state of rest gives the fish no chance to escape because they often remain motionless under stones.

The early morning means the time immediately during and after the sunrise, the sun is already two hours in the sky, which in midsummer even at 8 o’clock may apply, most large predators will  retreated back into their caves. Especially in these hours, the probability that a large hunter such as a Dentex (toothed bream) or a grouper (Epinephelus marginatus) is found will be marginally higher.

In the morning as well as in the evening hours the spear fisherman has to change his search pattern. Due to the lower incidence of light, the colors blur into a single blue and it is difficult to discover fish by their color. The flow of water and waves creates movements in the sea and the seafloor, these movement patterns, you should give special attention, every asynchronous movement to the moving flora gives an indication of game. Often this is the only way to see a fish from several meters at the surface.

You should also dive down to a greater depth from time to time, the diver often notices how many fish are actually under itself, which one has not noticed at all from the surface. If you discovers a fish but the distance for a good shot is too big, try to not lose the sight of the fish and dont change the target. The eye will automatically aim the fish’s outline and perhaps bring the desired success on a second dive- down.

The time changes the shadow situation and hunting in the water immensely. Specially predatory living fish attack from the shadows. This is also illustrated by their skin texture, the top of the fish often has a dark color, making it difficult to spot them in dark corners. During the day with almost vertical incidence of light, the rocks drop far less shadow, as it is the case in near-horizon sun. It is these long shadows that give our hunting destination the necessary light security to earn its dinner. If the predator food fish move through the horizontally running light rays, their shadow carries the information immensely further than it would do by daylight.

Lead is required for this technique.

Here, the diver dives and lies down on the seabed. For a good aspetto you should have a well-trained lung. This technique spezialized to the lead and the required dive time of at least 1 minute. If you are below the zero taring level (see chapter lead) you can lay down without be dragged upwards. The first few times you will be amazed how many fish will appear after a short time of seafloor rest. These often come close to the diver and show more interest than shyness. Many different fish such as bream and mullets are easily captured by this technique. Always remember that there must be enough air left to dive to the surface.

Hunting of coastal species and their behaviour patterns

If you have spotted object of desire, assure first whether this possesses a worthwhile size at all. If the fish is small, then it is better to let it swim. It is worth to know the behavior of some fish, as they often show a  typically pattern which allows the hunter to approach a sufficient firing range. Generally, it is worthwhile to observe the fish first, does he eat, hide or hunt for other fish? You will have the best chance of catching the fish if he did not noticed you. Once he has registered, it will not be difficult for him to escape a lumbering spearfisher. Always try to approach the fish from behind or side, never from the front.

If the fish has noticed you and you are not yet in range, better dive up and follow him until he resumes his focused actions, now dare to try again. Sometimes fish hide in caves and it is worthwhile to look more closely. Often the fish waits until the “attacker” disappears, so look where it has disappeared. Come back later, often the fish will be infront of their caves again. Caution is advised when shooting, it often comes to stones, so pay attention to where you shoot at great depths and open your reel early enough.

Often frightening, larger breams are slower and therefore easier to hunt, do not hesitate to shoot, often very fast. Sometimes it is worth keeping in swimming direction with largerones.

Very much appreciated food fish. Ideal to shoot when he fumbles the floor. Tracking the animals is worth it, they often flee 20-30 meters and then continue to search for food. Often accompanied by small fish that try to catch a bite from the stirred up sand.

Very fast and careful fish, good in Aspetto. Shootable in large swarms as they graze the ground. Tip: Sometimes it pays to swim after a swarm as quickly as possible, this one flees straight ahead, but often makes a sharp left or right turn after a few meters. This is the ideal moment for a shot, as the fish stands sideways to the diver.

Amberjacks (due to their amber-like color) called, are often attracted by tumults: light, flashing, sounds underwater. Sometimes circling the diver, at first careless. If you do not take the opportunity, you will be mourn for a long time. Often found over sandy areas (medium depth). Near the coast you will find young fish, which spend their youth in the bays, please dont shoot them so that they can develop into the beautiful, large pelalgic hunters.

Mostly at greater depths (> 10 m), often at reef edges, which drop steeply (to 30- 40m). Often you occupy sunken wrecks. Please do not shoot undersized fish. Quite forbidden in France. Often float in the water and watch the diver. Groupers are recognizable well from the distance due to their fan-like pectoral fin stroke. Especially groupers you should really only hunt large specimens, this fish has unfortunately become rare in the entire Mediterranean. Minimum size length is in many countries 45cm plus, in other countries it is completely forbidden to shoot groupers. If the fish underwater seems too small, this will hardly change on the surface, let him go!

Should better be let where they are. These ones are very dangerous when spearfished. Own spiked infectious teeth and are very difficult to kill underwater. A moray eel even bit through my 5 mm neoprene glove and left a small but extreme bleeding wound. The next day, the size of the hands were doubled. The painful swelling stayed for a week. Have a firm and fatty meat. Big moray eels can bite off your finger and they wont let you go that easy.

After diving, there are a few things to do, especially after cold dives, which reduces the risk of getting a flu.

Much more tipps in my video tutorial: