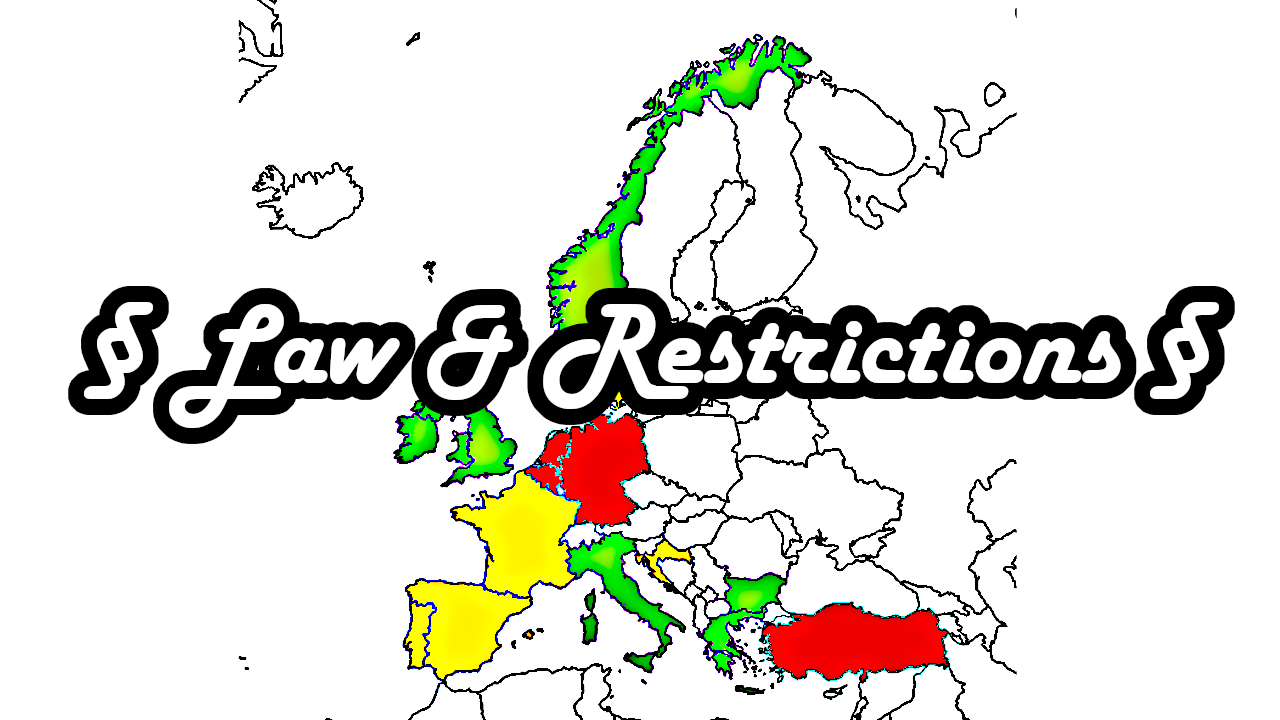 You are interested in spearfishing? But you do not know what the rules, restrictions and laws are in the Mediterranean countries in Europe? Here you can find all the answers for the following countries: Germany, France, Croatia, Italy, Spain, Portugal, Netherlands (Holland), Greece, Turkey and Bulgaria. I also listed the rules in Denmark, England and Norway. A small article explains in which countries Spearfishing is prohibited.

A few rules apply to ALL countries where spearfishing is allowed, and I think it is a good thing to adhere to them if you want to live off and with nature.

You have to carry your licenses in many countries, it’s best to pack them in a waterproof document bag and then off to the buoy. The bags are available on Amazon in all sizes:

If you have found your favored spearfishing region, I would like to recommend my spot maps and guides to you. There you will find my secret spots and everything you need to know for successful hunting in the different countries.

The following guide is for those who are just beginning spearfishing. You will find the country-specific guides under the following countries.

If you are still looking for a Speargun i recommend you my following article:

First Speargun: which one shall i buy?

If you are still looking for basic spearfishing equipment i recommend you my following article:

Start/learning Spearfishing: what do i need tutorial

And last but not least, if you caught some good fish, give it a record in here:

In the following countries, spearfishing is prohibited, which of course does not mean that it is also prohibited to own a speargun. A real advantage.

In Germany, spearfishing is prohibited. It is allowed to own and produce spearguns from the age of 18, but not to kill a fish. It’s that simple. Please don’t come up with the idea to go into a lake with a speargun and try out the harpoon, you’ll have problems faster than you can push off.

When you want to fish in germany, better fish with a rod, easy.

Saltwater fishing is allowed all over Holland, for fresh water fishing you only need the VISpas and you can fish for just 35 € a year, good catches guaranteed. However, finding out more about spearfishing in the Netherlands is more difficult.

In summary, however, it can be said that it is prohibited. Finding sources is almost impossible, I would not care.

While researching my own vacation in Sweden, I was shocked to discover that Spearfishing is forbidden in Sweden. The possession of a harpoon, which is a weapon in Sweden, is only permitted with a permit. Even then, possession is only permitted for target practice. Little or no official information can be found on the Internet. However, one reads of horror stories about “Speargun smuggling” and heavy fines. If you want to go to Sweden, you can rely on the fishing rod.

In the following I explain in which countries spearfishing is allowed, what to look for in the respective countries and which rules you have to observe.

France has much to offer with the Mediterranean and the Atlantic. If you want to spearfish in France, there are two options. For the first you buy a spearfishing license in a local spearfishing club or spearfishing store, google makes it possible. This costs about 40 € until the end of the year, there is no discount for foreigners. With the license you can also do other sport fishing activities. The license is also considered an insurance and covers claims. You will receive it at FÉDÉRATION NAUTIQUE DE PÊCHE SPORTIVE EN APNEE (FNPSA).

The second method is to contact the local port authorities (“Affaires Maritimes” in French) and ask for a free permit. This allows you to fish anywhere in France, but under the condition that you have accident insurance, which covers you and strangers in case of damage.

In order to hunt in Croatia you need two things: first, a membership in a Croatian Spearfishing Club and second, a license. The licenses are available in all major cities which are located on the sea. You get information where you get it from the harbor master or in various fishing shops, the easiest way is to ask. Converted costs the license about 60 € for 10 days, not cheap. In addition, one is often sent from shop to shop and from there from an “official” place to the next. Some have never received this license.

Also you get the license online, which of course makes a lot easier.

A license and membership can be purchased in any “larger” city. Cost for 10 days about € 60, -. Best to ask at the port (information, etc.) right after the license, or at a shop for fishing. Alternatively, the license can also online under spearfishing license Croatia. Membership and license must be purchased separately. First of all, you get the membership (confirmation by e-mail) and then the license (confirmation is also sent by e-mail). Look for Sportfisheries on the website, not Recreational Fishing, or you will not find what you are looking for.

The whole thing makes it difficult to spearfish in Croatia enormously. In addition, there is little fish left in Croatia that you can find without a boat, if you are looking for a good spearfishing location, I would recommend the other countries more to you (own experiences).

f you are looking up the internet for spearfishing in Greece, you will repeatedly come across the license requirement on the Internet. This is simply wrong. Greece has suspended the spearfishing license in 2017. This is related to the almost impossible huge area which is uncontrollable. Quite to our delight, spearfishing is allowed throughout Greece, making it one of my favorite hunting grounds. We have to stick to a few rules. Flashlights and night hunting is prohibited. The minimum distance to bathing beaches and harbor entrances and harbor exits is 200 meters. The minimum sizes of the respective fish can be found under minimum sizes fish Greece.

Are you looking for spearfishing guides and spots in Greece, then I recommend the Aegean Islands or Crete? Greece is rocking!

Here I have learned spearfishing and that’s why Italy will remain the eternal spearfishing sanctuary for me. For the Italians spearfishing is a popular sport, which is why the fish has become very shy and in short supply. Nevertheless, you can still find a lot and good fish. For spearfishing in Italy you do not need a license. But there are some rules to follow:

Spain has a lot to offer fish, unfortunately also a lot of bureaucracy.

In Spain there is a license requirement, which is provided by each autonomous region, which has the authority to create its own regulations. You get your license from the Ministry of Fisheries and Agriculture and need the following things:

Each license is valid only for the respective region, not for other regions. Procurement without language skills is quite difficult.

In all regions there are nature conservation and prohibition zones, there are different prohibition classes. In some zones you may fish only on certain days of the week and never in others. Where you receive your regional license you will be informed about the prohibitions. Again, ignorance does not protect against punishment.

Are you looking for guides and spots in Spain? I can highly recommend Mallorca!

The Portuguese themselves simply buy their license from an ATM, but this is not easily possible for a foreigner. You can get the license for foreigners very easily on the Internet (English)
https://www.dgrm.mm.gov.pt/web/guest/pesca-pl-licenciamento

Then an email with the required data to:
pesca.ludica@dgrm.mm.gov.pt

Transfer the € 10 (if a month is enough) (account details etc. everything is in the instructions) and attach the proof of payment.

Within a few days you will receive an email with the license “the proof of payment of the recreational fishing license, in pdf format”. (Thanks to Morten for the information).

For Bulgaria, you do not need a license in the Black Sea. This applies to residents and foreigners. Lucky. Spearfishing in lakes or rivers (freshwater) is forbidden.

For locals, the amateur license is optional and can be obtained from the Ministry of Agriculture and Land Affairs. This license is valid for 2 years. Foreigners who have a permanent residence / work permit in Turkey or are officially invited to apply: the so-called “guest amateur fishing license” is required. This can also be requested by the Ministry of Agriculture. This costs about 24 € and is also 2 years durable.

Norway is the dream of every angler and spearfisher. This country has an incredible amount of fish to offer. To spearfish or go fishing in saltwater you do not need a license. Lobsters are closed to foreigners (but there are so many other things). Also in Norway you should stick to the minimum sizes.

The following fish species are prohibited year-round: Spiny dogfish, basking shark, porbeagle, blue ling, lobster, bluefin tuna, silk shark, eel, wrasse. Not protected year-round (closed seasons): Greenland halibut, halibut, lumpfish, redfish. It is illegal to sell your catch. You must not fish closer than 100 meters to fish farms. You are allowed to carry a maximum of 10kg fish or fish products (fillet;)) from Norway. More information can be found on fiskeridir.no

Are you looking for spearfishing guides and my secret spots in Norway? All about Norway the Spearfishing Mecca can be found here:

Denmark, you just do it nice to us. The necessary license to Spearfishen there in every post office. The license is also the fishing license, which makes it even more enjoyable. Converted costs the license for a year fun about 25 to 35 €. You can even get all that online, just here Danish Ministry of Environment and Food.

Quotation: “If you fish with light hand tools, you need a sport fishing gear, such as fishing tackle, pirk and speargun – equipment used for active fishing.”

For more information, I attach the FAQ of the Ministry very much to my heart. It is important that in Denmark you pay attention to the protected zones, closed species and the minimum size. Tickets are also available in the post offices.

You do not need a license in England, Scotland or Ireland. It is forbidden to spearfish in fresh water.

Spearfishing is generally allowed in Finland, but there are some licenses that are required.

That sounds a little complicated, but it usually isn’t! REMEMBER that spear fishing is not permitted in rivers and anywhere between 16.4. and 20.06. without special permission. Any species of fish can be shot, but many fish have minimum sizes. (Here are the competition rules for spearfishing )

11 thoughts on “Spearfishing in Europe – Law, Rules and Restrictions – countries”